There is a reason why our Sicily luxury tours include an array of cooking classes.
A Sicily cooking class is more than just cooking: it is a lovely insight Sicily to the history and the of the island, an intrusion into gorgeous landscapes, a love-affair with scents and flavours, a joyful moment to share with relatives and friends. Food is a serious matter in our island.
Sicily has been blessed with a fertile land offering a variety of produce and a surrounding sea teeming with fish.
The centuries of domination by various populations have enriched Sicily with new architecture, landscapes, culture, and customs but most of all with new ingredients and unusual flavours.
Greeks brought olives and refined the local wine making brought initially by Phoenicians.
Romans introduced fava beans, chick peas, lentils and devoted huge portions of land to grain production: at that time Sicily was named the granary of the Roman Empire.
Arabs brought almonds, aniseed, apricots, artichokes, cinnamon, oranges, pistachio, pomegranates, saffron, sesame, spinach, sugarcane, water melon and rice. They introduced many flavours that are now considered typically Sicilian, including the sweet and sour combination of the caponata. They started the pastry-making tradition based on the use of unusual ingredients such as ricotta cheese, almonds, dried fruit and honey. They created ice-creams and the delicious granite made with snow from Etna as well as masterpieces with marzipan and candied fruits.
Sicily also owes the Arabs the most advanced farming and irrigation techniques which gave a strong drive to food production.
During the Normans and Hoenstaufen domination Sicily inherited innovations including the rotating skewer for cooking meat and air salting of fish.
The French domination left the island a legacy of chefs cooking for the aristocracy, locally called the Monsù.
From the New World the Spanish provided tomatoes, chili, sweet peppers, potatoes and maize which gave birth to new recipes and enriched existing ones.
Sicily cuisine is seasonal and definitely km 0.
This is the reason why you eat very well all over Sicily: chefs we collaborate with usually use the produce of their own farms or those of local producers. Most of the times, vegetables and fruit you eat are organic. Local fishermen contribute with the daily catch.
You’ll literally taste Sicily.
You can trust us when we define our Sicily cooking class selection as luxury tours: in our global era eating true local food is real luxury.
At a noble palazzo, at a posh restaurant in Taormina or in the countryside, our chefs and cooks will introduce you to the secrets of Sicilian cuisine: no matter if mamma/nonna style or Michelin style, you will never be disappointed. Some of them will bring you to experience local markets to buy fresh ingredients for your cooking class: a touch of local folklore and everyday life with local people.
If you want a private class with just your few traveling companions, make sure you specify that when you reserve; otherwise you will enjoy the company of other unfamiliar students. One way or another, be ready to discover the pleasures of the table in Sicily.
Our signature Sicily luxury tours and cooking experience are always a pure world of Sicilian style!
Select the one which suits better your ideal cooking experience and be sure it is a pampering one for your palate, your eyes and your heart.
Your luxury tour, your food luxury experience with L’Isolabella. 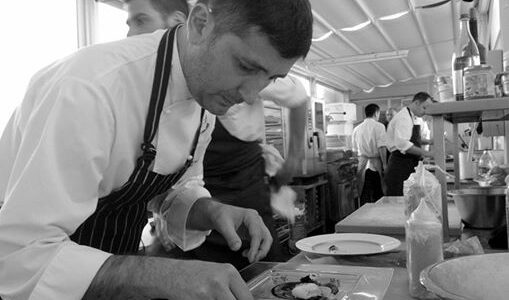 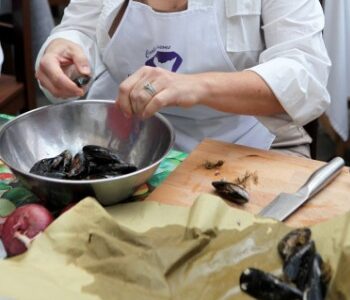 Herbs, spices and cooking at a kitchen garden in Scicli countryside

Sicilian cuisine at a noble Palazzo in Palermo